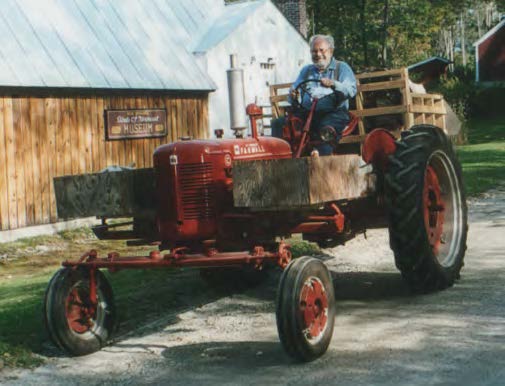 I had never been so terrified in my life.

I usually loved sugaring season and how maple permeated my life for those short, intense weeks between winter and spring. I loved the trees as they came to life, loved how the chickadees’ spring whistles would answer the gentle creak of my father’s hand awl as he tapped the trees. I loved the pinging of sap into metal buckets, loved the smell of the steam-filled sugar house, and loved the
quiet roar of the evaporator over the crackling wood fire. I even loved helping out at the famous sugar-on-snow parties at the Audubon Nature Center, endlessly explaining to tourists the route a drop of sap takes on its adventure from tree to metal can.

But I did NOT like the Nature Center’s tractor.

It was a huge, red behemoth with rear tires that were taller than I was. It had a seat on a spring that bounced up and down and a little pipe on the top where exhaust came out. I liked riding on the back of it just fine, standing behind my father and holding onto his shoulders. I also liked standing on the wooden runner boards of the gathering tank while my father towed it through the orchard. It was especially fun when my father drove through the muddy brook and the water gushed up over the boards. I had to pick my feet up and cling to the tank itself. He would always glance over his shoulder to make sure I hadn’t been swept downstream.

But the tractor itself was loud and scary.

One year on the first day of tapping, when I was about twelve, my father hitched on the wooden, flatbed trailer and loaded it with hundreds of stacked buckets. He would drive through the orchard, stopping at central locations, and we would carefully place the required number of buckets at the base of every maple. Then, over the next few days, he and volunteers would tap the trees and hang the buckets. But he was the one who made the all-important decision about how many buckets each tree would get. It was an instinct my father had—I never saw him measure a tree’s girth. After years of sugaring, each tree had become a personal friend of his.

But before we headed out that morning, he paused. “If someone drove the tractor slowly,” he said, looking right at me, “and I walked along beside it to scatter buckets, it wouldn’t take so long.”

Behind me, I felt the tractor getting taller by the second.

“You do know I’m twelve, right?” I asked. “And I can’t get my learner’s permit for three years?”

My father did that kind of shrugging thing he did. “Well, you’ve got long legs.”

I rolled my eyes and was glad he hadn’t pointed out that he had been driving tractors since he was six.

“I’ll show you how,” he said before I had agreed, and he swung himself up onto the seat. I climbed to my spot behind him. He fired up the engine and started pushing his feet on pedals I’d never really noticed before. And he did something with his right hand on some little sticky-up things near the steering wheel. All the time, he was talking very loudly over his shoulder at me.

I found myself nodding. It was kind of like when he explained my math homework. I understood it as he went, but by the time he got to the last step, the first few were long gone.

After a little while, he stopped. “Okay?” he asked.

He took that as an affirmative, and before I quite knew it, we’d traded spots.

Yes, the tractor was at least six times taller when I was in the bouncy seat.

“See, your feet reach,” he said from where he stood at my shoulder.

I looked ahead of me. We were on the side of a hill. The road was just a little wider than the tractor, and it was sunken down between banks on either side. Innocent maples grew close. I glanced over my shoulder. The trailer loaded with buckets was even wider than the
tractor.

“Stop before you get to the brook,” he said. “You probably don’t want to try that today.”

I shot him an incredulous glance, but he was already telling me what to do with my feet and the little sticky-up things. I drew a deep breath, held it, and tapped the thing he’d called a clutch very gently with the toe of my boot.

Things happened fast. The red behemoth made a deeper-throated  growl than I’d ever heard before, a huge puff of dark smoke came out of the pipe, and then there was a lurch and a jolt and we blasted forward. I heard my normally unflappable father yell something in my ear that sounded like “Steer!” But the wind racing past me tore
his words away. I looked away from my feet and up the road, but it was gone and there wasn’t anything except maples in front of me.

I heard the word, “Brake!” but I had no clue which pedal that was, and the maples were picking up speed. So I slammed both my feet down on everything they could reach.

With the shriek of overstressed metal, the tractor flung itself to a halt and shut itself off, tilted to one side. Behind me, piles of neatly stacked buckets toppled into each other, flew off the trailer, crashed to the ground, and rolled down the hill. For a while, my father and I were silent, listening to buckets slam into trees. Then it was very quiet.

He kind of laughed, but I wasn’t feeling it. So he jumped down, and he had to give me a hand because my knees weren’t working any longer.

The tractor had one set of tires in the road and the other set up the bank. There was a maple about five inches in front of its nose. I thought the poor tree looked kind of pale. If it had had apples, I’m sure it would have thrown some at me.

“Did I kill it?” I asked, nodding at the tractor.

My father snorted. “It’s a Farmall.”

Still, I noticed he gave it an apologetic pat as he climbed up to the seat. While he backed onto the road, I started picking up buckets.

Hours later, when it was getting dark, we walked to the parking lot. But before we got into the car, my father stopped and looked at me. “Three years, you said?”

Kari Jo Spear‘s young adult, urban fantasy/romance novels are available at Phoenix Books (in Essex and Burlington, Vermont), and on-line at Amazon and Barnes and Noble.

Previous posts in this series:
Part 1: The Early Years
Part 2: The Pre-teen Years (or, Why I’m Not a Carver)
Part 3: Something’s Going On Here
Part 4: The Summer of Pies
Part 5: My Addiction
Part 6: Habitat Shots
Part 7: Growing Up
Part 8: My Dead Arm
Part 9: Remembrance: Tales of My Father
Part 10: Canoe Lessons
Part 11: Battlefields
Part 12: My Father and the Speedboat